Newfoundland Puppies For Sale in Pennsylvania

Not only do we consider ourselves responsible breeders who work diligently to follow AKC breed standards, but we are also Newfoundland owners and lovers just like you. We bought our first Newfoundland puppy back in 1998 and have never looked back. Today, we reside on 21 acres of land in Wilmington, OH and treat our dogs like valued members of the family. With a high-quality diet and the freedom to play and roam our property, we do everything we can to ensure our dogs have everything they need to enjoy their lives and breed happy, healthy Newfie puppies.

Wanting each of our puppies to have the greatest quality of life possible, we encourage adopters to reach out to us with questions. We’d be more than happy to provide you with tips and advice on proper care, diet and exercise before you bring your newfoundland puppy home to Pennsylvania.

Take a look at some of the adorable Newfie puppies for sale at Horner Newfoundlands and contact us today at 513-633-3049 or 513-383-1089 for more information. If you live in Pennsylvania and are interested in purchasing a Newfoundland puppy, we would be happy to discuss our shipping policies with you. 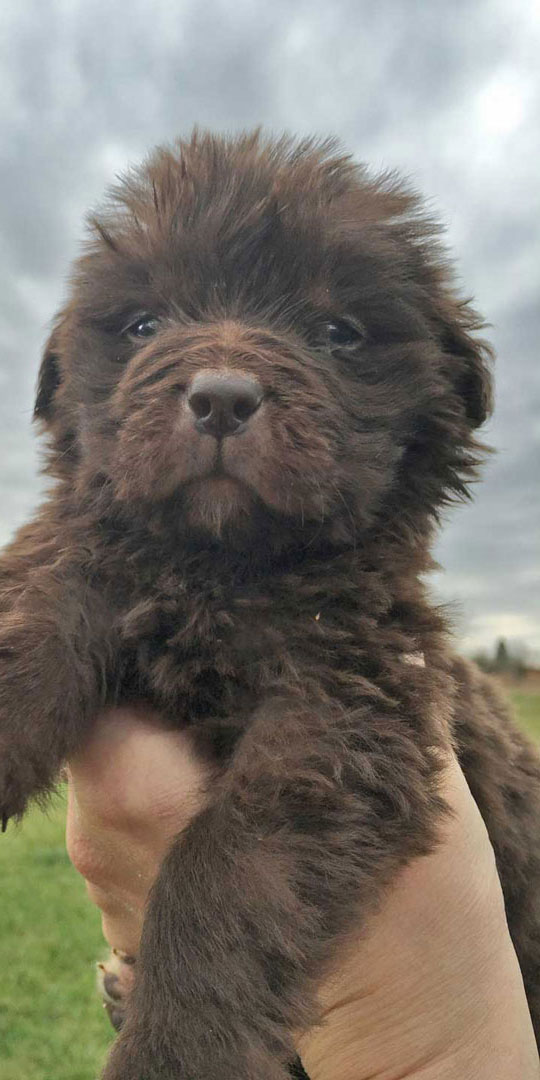 Official Standard of the Newfoundland Puppy Breed in Pennsylvania

General Appearance: The Newfoundland puppy is a sweet-dispositioned dog that acts neither dull nor
ill-tempered. He is a devoted companion. A multipurpose dog, at home on land and in water, the
Newfoundland is capable of draft work and possesses natural lifesaving abilities.
The Newfoundland is a large, heavily coated, well-balanced dog that is deep-bodied, heavily
boned, muscular, and strong. A good specimen of the breed has dignity and proud head carriage.
The following description is that of the ideal Newfoundland puppy. Any deviation from this ideal is to
be penalized to the extent of the deviation. Structural and movement faults common to all
working dogs are as undesirable in the Newfoundland as in any other breed, even though they
are not specifically mentioned herein.