Newfoundland Puppies For Sale in Kentucky

Welcome to Horner Newfoundlands. Where we provide AKC standard Newfoundland puppies in Kentucky and surrounding states.

In 1998, I made the decision-to-purchase my first Newfoundland puppy for my wife’s birthday. It was simply the best decision we’ve made.

We reside on 21 acres in rural Wilmington Ohio where our dogs have room to play, eat, sleep and have beautiful puppies.

Our dogs live with us forever, and the pups are an added bonus. I strive to produce the perfect Newfoundland puppies in Kentucky. I follow AKC standards to the best of my ability. The following colors are AKC standard; black, brown, gray and white with black markings.

Click to see our selection of Newfoundland Puppies For Sale! 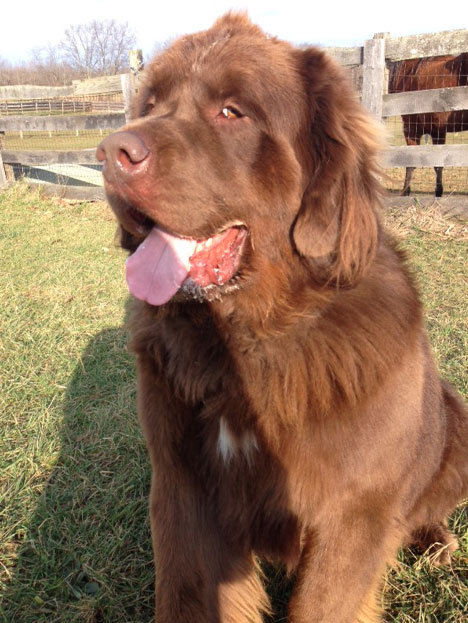 Official Standard of the Newfoundland Puppy Breed in Kentucky

General Appearance: The Newfoundland puppy is a sweet dispositioned dog that acts neither dull nor ill-tempered. She is a devoted companion. A multipurposed canine, at home, on land and in water, the Newfoundland breed is capable of draft work and possesses natural lifesaving abilities.

The Newfoundland dog is a large, heavily coated, well-balanced dog that is deep-bodied, heavily boned, muscular, and strong. A great specimen of the breed has dignity and proud head carriage. The following description is that of the ideal Newfoundland puppy.

Any deviation from this ideal is to be penalized to the extent of the deviation. Structural and movement faults common to all working dogs are as undesirable in the Newfoundland as in any other breed, even though they are not specifically mentioned herein.

Size, Proportion, Substance: Average height for adult dogs is 28 inches, for adult bitches 26 inches. Approximate weight of adult dogs range from 130 to 150 pounds, adult bitches from 100 to 120 pounds. The dog’s appearance is more massive throughout than the bitch’s. Large size is desirable, but never at the expense of balance, structure, and correct gait. The Newfoundland is
slightly longer than tall when measured from the point of shoulder to point of buttocks and from withers to ground. He is a dog of considerable substance which is determined by spring of rib, strong muscle, and heavy bone.

Head: The head is massive, with a broad skull, slightly arched crown, and strongly developed occipital bone. Cheeks are well developed. Eyes are dark brown. (Browns and Grays may have lighter eyes and should be penalized only to the extent that color affects expression.) They are relatively small, deep-set, and spaced wide apart. Eyelids fit closely with no inversion. Ears are
relatively small and triangular with rounded tips. They are set on the skull level with, or slightly above, the brow and lie close to the head. When the ear is brought forward, it reaches to the inner corner of the eye on the same side. Expression is soft and reflects the characteristics of the breed: benevolence, intelligence, and dignity. Forehead and face are smooth and free of wrinkles.

Slope of the stop is moderate but, because of the well-developed brow, it may appear abrupt in profile. The muzzle is clean-cut, broad throughout its length, and deep. Depth and length are approximately equal, the length from tip of nose to stop being less than that from stop to occiput. The top of the muzzle is rounded, and the bridge, in profile, is straight or only slightly arched. Teeth meet in a scissors or level bite. Dropped lower incisors, in an otherwise normal bite, are not indicative of a skeletal malocclusion and should be considered only a minor deviation.