Newfoundland Puppies For Sale in Illinois 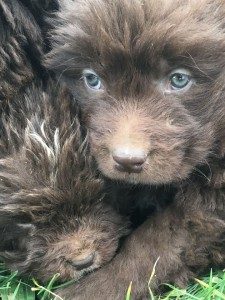 You have landed at Horner Newfoundlands. Where we provide AKC standard Newfoundland puppies in Illinois and surrounding states.

In 1998, I made the decision to buy my first purebred dog. After much consideration and reviewing various dog breed book, I purchased a Newfoundland puppy for my wife’s birthday. We have never regretted that decision.

We reside on 21 acres in rural Wilmington, Ohio where our dogs have room to play, eat, sleep and have beautiful puppies.

Our dogs live with us forever, and the pups are an added bonus. I strive to produce the perfect Newfoundland puppies in Illinois. I follow AKC standards to the best of my ability. The following colors are AKC standard; black, brown, gray and white with black markings.

Click to Learn More About our Available Newfoundland Puppies For Sale!

Official Standard of the Newfoundland Puppy Breed in Illinois

General Appearance: The Newfoundland puppy is a sweet-dispositioned dog that acts neither dull nor
ill-tempered. He is a devoted companion. A multipurpose dog, at home on land and in water, the
Newfoundland is capable of draft work and possesses natural lifesaving abilities.
The Newfoundland is a large, heavily coated, well-balanced dog that is deep-bodied, heavily
boned, muscular, and strong. A good specimen of the breed has dignity and proud head carriage.
The following description is that of the ideal Newfoundland. Any deviation from this ideal is to
be penalized to the extent of the deviation. Structural and movement faults common to all
working dogs are as undesirable in the Newfoundland as in any other breed, even though they
are not specifically mentioned herein.